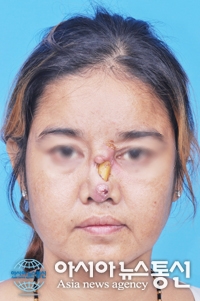 Being look more beautiful is the instinct of every woman.

This instinct is not just only in Korea, but all over the world are also the same. Senda (sanda Maung Win) women from Myanmar, of course she is not different with other women who want to be beautiful and gain confidence.

Senda has typical people who live in Southeast Asia that has a blunt nose but otherwise Senda want to have a low and slender nose and finally opted for surgery.

However, the results of which were made by Senda isn’t beautiful as she expected, the side effects of plastic surgery makes the original nose of Senda be seen falling and damaged so it can not be done from the outside.

The problem that Senda faces is not finished yet. The nose that looks droopy also causes the inflammation and almost reach reaching the nose which is can causing the blindness. Nasal cartilage and nose skill were melting and the silicon become apparent, and the most harmful than all this inflammation can causing blindless and prolonged illness.

In Myanmar Re-operation will be so difficult to do, She just live day by day with doing a diagnostic till finally she heard a news about famous Plastic Surgery in Korea and decided to come to South Korea after worrying about a lot things.

Beautifully raise the nose is the only one that she knew, Concerns about could she show his face which had already cluttered to Clinical Operations in Korea is too big, but Senda has no other choice.

However Senda do not know the results of nasal reconstruction in Korea will be a different shape. Which mainly silicon appears to be issued, with transplant skin, nose and skin reconstruction has been done. In this process of inflammation is not so big and not have to worry until the condition improves.

According to the medical explanations, reconstruction that Senda faces is not simple as normal cases.

Inflammation is also very severe, nasal cartilage and skin also has been melt caused by the exposed silicon, the treatment for inflammation and silicon revocation must be done first.

To makes the bone be perfect back the melted nose and nasal cartilage should be replace by rib cartilage and used for the foundation of the nose, after the transplantation of skin on the forehead above the nose reconstructed.

After completing of the operation immediately Senda thank to the staff.

Because of the inflammation that Senda suffered tremendous pain and messy facial make Senda more stress. But after undergoing nasal reconstruction Senda feel very satisfied with the shape has changed very drastically.

Senda entrust the recontruction process in Clinic Shimmian and Senda can not forget her first meeting with the Director Chang Geun-Wook.

Director Chang said: "The conditions experienced by Senda is the conditions that must be treated immediately because it is severe," For those who are not responsible for the operation that Senda had been done, if reconstruction surgery is not been done then Senda’s daily life will also be very difficult.

Here's "The current condition of the side effects nose surgery that performed Senda has been reduced, but the skin of immature operations or operating environment that does not support the patient's condition and if not often held the examination will be able easier to hit by side effects" nose surgery should choose a doctor who can be trusted, so if you are exposed to side effects, immediately consult and do reconstruction of the nose so that the nose can be good soon back "advice from the Director 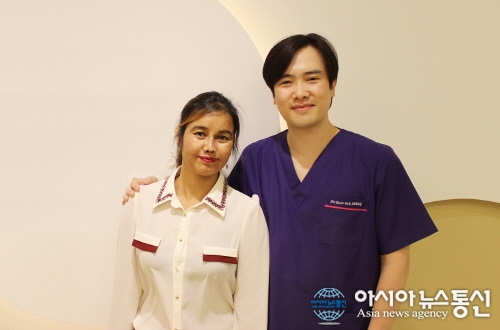 Copyright 2016 by SHIMMIAN. all rights reserved.